A 40 Year Love Affair With Thredbo 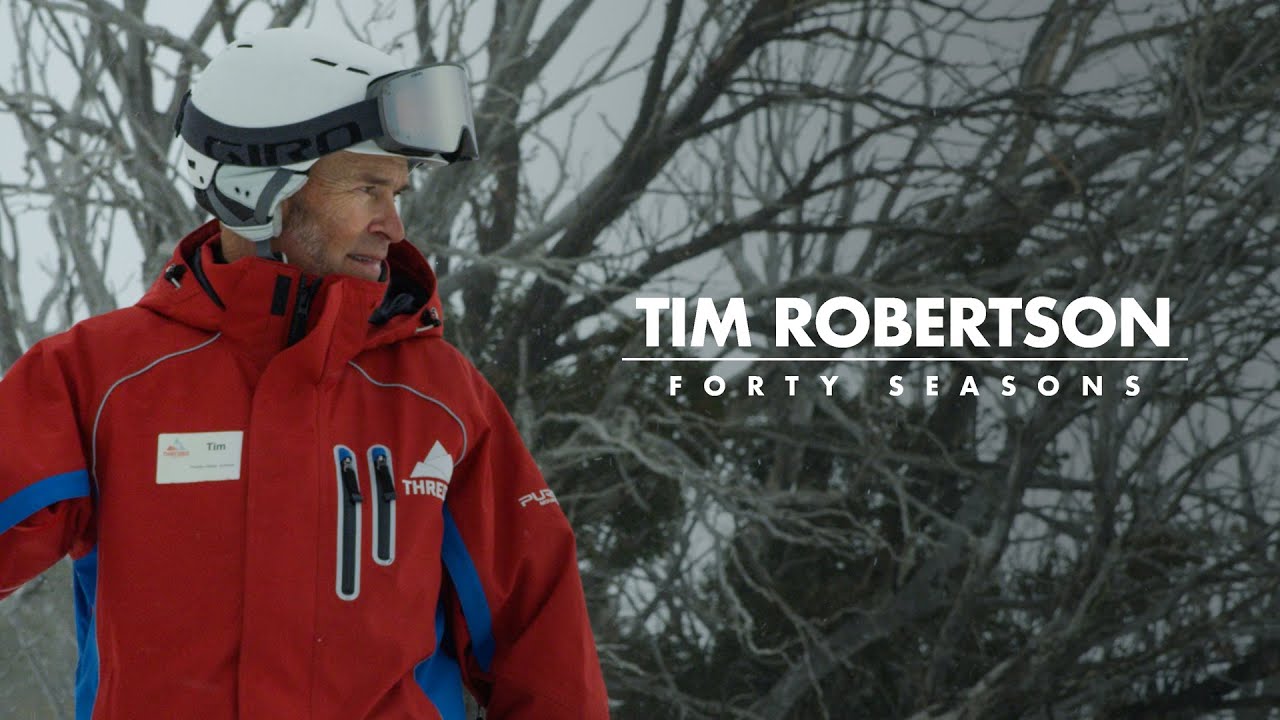 Skiing is a leisure activity for many. For Tim Robertson, it’s a lifetime love affair that has taken him around the world, introduced him to his wife and has been passed on to his son. Recently celebrating 40 years as a ski instructor at Thredbo, Tim’s passion for skiing and the mountain community remains as fervent as ever. We caught up with Tim “Robbo” Robertson to find out how it all began… ‘‘I was introduced to skiing when I was about 9 when my dad worked overseas (as a diplomat) in Lebanon of all places. He went skiing and I joined in and ever since I put my skis on I just loved the sport.’’ After returning to Australia, Robertson got to work bribing his dad to take him skiing at every opportunity.

‘‘I cleaned his car twice a week, mowed the lawn three times, we had the best lawn in town just to get up to the mountains so we could go skiing. I fell in love with the sport and I was always trying to go skiing every time possible.’’ Fast forward to 1981 and Robertson, then in his early twenties, was keen to progress his skiing so he enrolled in a hiring clinic at Thredbo. ‘’I was a bit of a punter and one of the best ways to improve your skiing without paying for lessons was to jump in a hiring clinic and go through the process of learning to ski and how to teach.’’

On the second day of the clinic he was pulled out and asked to teach a lesson.

‘’I didn’t know anything about teaching at all, I was pretty raw so they were pretty desperate for ski instructors. I taught this lesson, I had no idea what I was talking about and anyway I must’ve done a good job because the guy rebooked me the next day.’’ Since that first lesson, ski instructing has taken Robertson all around the globe, from Beaver Creek in Colorado to several countries in Europe, and he’s made a lot of friends along the way. ‘’There’s a great skiing instructor community and I love that idea of catching up with people in different parts of the world. You could be anywhere in the world, far reaches of continents and still run into somebody you know from years back.’’

Robertson met his wife Gabi at one of Thredbo’s après-ski venues, Schuss Bar back in 1988. Their son Sam was born in 1983 and it wasn’t long before he was taking after his dad and hitting the slopes. ‘’When he was old enough about 2 or 3 years of age he went skiing. We took him to Friday Flat and he just worked his way up to more advanced runs and I just gave him a couple of tips and showed him the love of skiing. He took it on with a lot of vim and vigour then he went on to represent Australia in two world championships in Schladming and Beaver Creek. He has a love for skiing that’s just as passionate as mine, if not more.’’ Aside from his family, being a ski instructor has given Robertson many proud moments over the years.

‘’The most common proud moment for me is skiing with people in a lesson and they’ve really enjoyed it and they really want to learn and you can see the smile in their face and you see them ski after the lesson and they’ve just had a great time and you can see they’re going to come back years to come and that’s something really to be proud about.’’ Now aged 62, Robertson still gets a kick out of teaching people to ski and plans on returning for many more years to come.

‘’I want to hit the 50-year mark in ski school, if my body can hang out there, then I’m going to push as hard as I can. I still enjoy the skiing, still enjoy the teaching. You’re going to see me in another 10 years time.’’ Meet our New for 22 Snowmaking Guns 💪❄️🔥 Firing them up this morning for the first time they will increase the amount of snow coverage at our dedicated beginners’ area and across the mountain as they are mobile throughout the season ✅ Game On ⛷🏂
Mountain transformation over the past two days 😱❤️🙏 Who’s getting excited?! 🙋‍♀️🙋‍♂️ Opening weekend kicks off 11 June and we’re celebrating the start of the season in style 👉 Link in BIO to check out everything that’s going on ✅
Looking to go backcountry? Get the knowledge and experience to safely be in the backcountry with Backcountry Tours Supported By @thenorthface_aunz
Who else is excited about this cold snap? 🙋‍♂️🧣🧤we’ve had another dusting today and feeling stoked for winter ⛷ 🏂
First Snow Of The Season, Winter Is Coming ❄️🏔🥶
With temps dropping we can’t wait to see our Mountain looking like this again 🥶❄️ Get into winter mode with new screensavers in our stories 👆 #bringonwinter
Dreaming of Supertrail laps 😴 This will get you through Friday! Throwback to a top to bottom run with Olympic Gold medalist @torahbright 💯 #BringOnWinter
Temps are dropping, seasons are changing…the countdown to winter is ON ❄️👍⏰ Time to engage winter mode ✅ Who’s keen? 🙋‍♀️🙋‍♂️ Hit the link in BIO to grab lift passes, rentals, lessons plus check out our biggest après & events calendar yet👆
Bookings now open ✅ We’re excited to launch all of our unique winter on-mountain experiences for the upcoming season ❄️ Plus we’ve added two new experiences for everyone to enjoy 👉 Kareela Supper Club @ghmummanz & Discovery Tours @landroveraus ⛷ Hit the link in BIO to find out more and book in your experiences today.
Come and meet the Easter Bunny at 10:30 on the Village Green 🐣🐰 plenty of @lindt_australia chocolate 🤤
Suns out 💪☀️🙏 Forecast looking good for the Easter Long Weekend 🙌 Time to RIDE 🤘 @thredbomtb
Jindabyne is set to go OFF this Easter Weekend for @thisisjustatributefestival 🤘🎸😎 Come up and enjoy the mountain before diving into this live tribute music festival on both Saturday & Sunday 👍 Link in BIO to grab your tickets and find out more.
View social feed