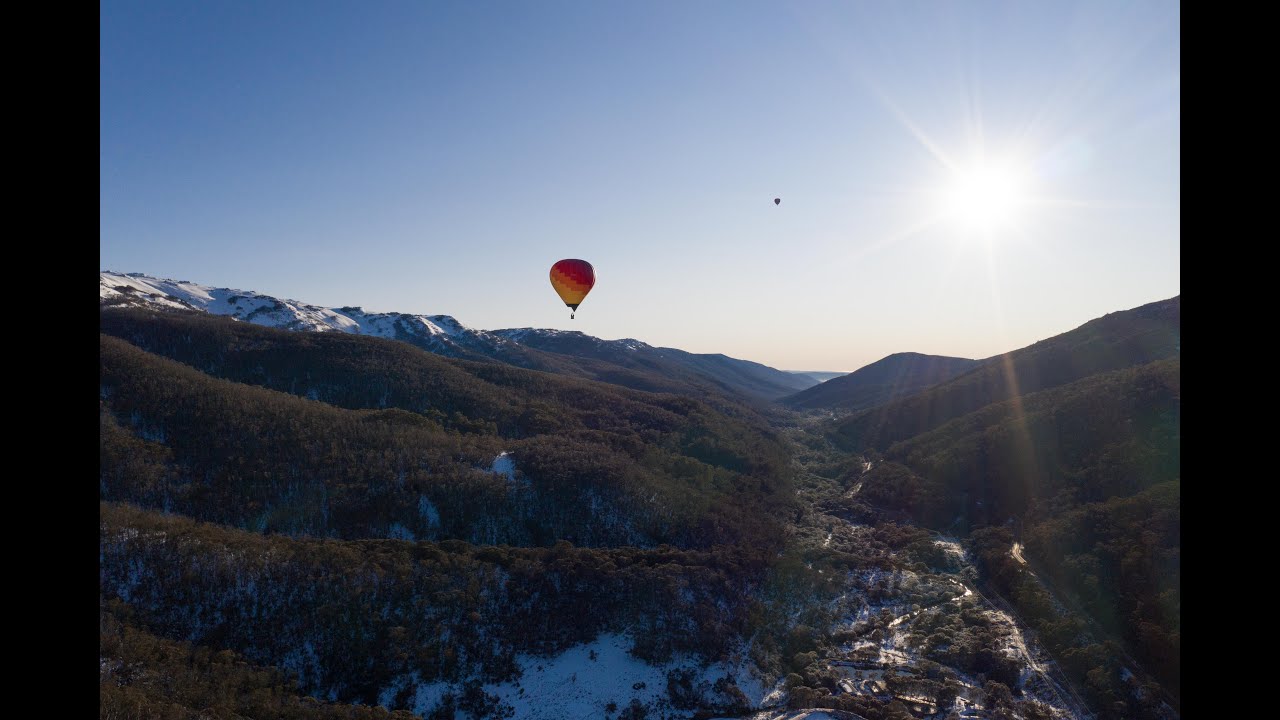 Something beautiful was lurking in the skies above Thredbo this morning…and it wasn’t snowflakes. As the sun rose over the mountains, two hot air balloons took flight as the first to fly across the Snowy Mountains from Thredbo to Jindabyne. Those early risers in the village awoke to the amazing spectacle of the big bright balloons filling up and taking off from the Village Green. The one off flight over the snow-capped mountains was an idea constructed by a couple of balloon enthusiasts from Canberra. Craig Farrell of Balloon Aloft said he had been dwelling on the idea for some time, and after talking with a fellow Canberra balloonist, they decided the most scenic place for it would be Thredbo! After gaining approval from National Parks and Wildlife Service (NPWS) and Kosciuszko Thredbo (Thredbo), it was all a matter of researching weather conditions and finding the perfect date. What a day to choose!

Stunning weather conditions greeted the two balloons on their hour long flight as they made the ascent to an altitude of 10,000 feet (over 3 kilometres), before quickly descending towards Jindabyne through much calmer air patterns. Floating down the Crackenback Valley, the two colourful balloons provided a spectacular sight in the sky for skiers and snowboarders driving up the Alpine way to Thredbo.

That’s a wrap ❄️⛷🏂 Due to this season's low natural snowfall and the warm, springtime conditions of recent weeks, we have needed to make the decision to cease winter operations for skiing and snowboarding from tomorrow. Thredbo Backcountry Tours are planning to continue until 11 October and the Kosciuszko Express Chairlift will be open for foot passengers and backcountry access. Thanks to our guests, employees and community for the 2020 snow season 🙏 We feel incredibly fortunate to have been able to deliver skiing and snowboarding this winter during such challenging times 😷. For everyone that has purchased lift passes, rental or Snow Sports lessons, we have emailed you directly in regards to a refund or credit👍. We look forward to the opening of the mountain biking and hiking season from 21 November. Stay tuned for more summer details dropping soon 🙌🚵‍♀️🥾❤️
Good Morning 🙌 Mother Nature turning it on 😍🙏⛷
Sunday Cruisin’ 🙌🏄‍♂️❄️
Turning up a storm this morning 🙌⛷ We wanted to give you a friendly update on our Season Pass offering for Winter 2021. We remain committed to the health and safety of our guests, employees and the wider community. With uncertainty related to COVID-19 continuing, at this point we are holding on releasing our 2021 winter season pass. When the path ahead for next winter is more certain, and we're confident we're able to deliver the unlimited skiing and boarding that a season pass offers, we plan to release a pass ahead of winter 2021. The good news is, we are preparing to release our summer products, including both Hiking and MTB Season Passes and will keep you posted when they're available for purchase. Thanks for your patience and understanding. We’ll be sure to keep you all updated on any season pass updates as we progress 👍❄️⛷❤️ Hit the link in our BIO to check out our FAQ’s surrounding COVID-19 operations.
Spring has sprung and the locals are out👋🦅🌼
The week that was 🙏❄️👍Powder, blue skies, windblown stashes and good times 😍 Hit the link in BIO to check out more of the action
The locals are out enjoying this beautiful weather 🌞
It’s a bluebird day ahead 🙏☀️ Perfect for finding those windblown stashes ❄️😍 Hit the link in BIO to check out the cams!
We’ve had 6cm of snow up high overnight, adding to the great coverage across the mountain ❄️👍It’s a mostly sunny day ahead ☀️ Time for some turns 💪
Everyone’s loving the conditions right now ❤️👍❄️ It was all about the mini shred today 🤙 @goproanz @burtonaustralianz
Conditions are 10/10 💪 Follow the leader 😜 Hit the link in BIO to check out more action ❄️
Up up and away for your Wednesday 🎈😍
View social feed