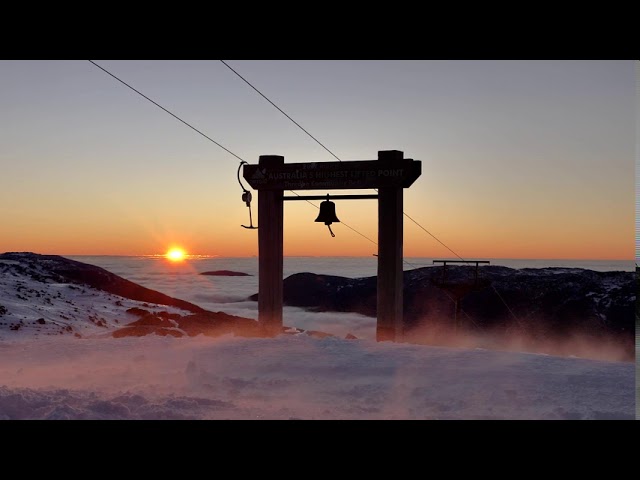 We’ve had an amazing week on the mountains with superb conditions for riding, a streak of mega snowmaking nights, windblown stashes and sunny days on the slopes.

It was the first time this season skiers and snowboarders could head up the mountain and ring the iconic Thredbo Community Bell after Karels T-Bar made its season debut on Thursday!

Snowlovers were all smiles as they stood at 2037 metres elevation, the highest lifted point in the country, and rang the bell. With clear sunny skies it was the perfect opportunity to appreciate the stunning views from the top of Australia and take some nice photos! Snowmakers had our biggest sessions so far this season with six consecutive nights of snowmaking and up to 200 snow guns firing in one sitting. That topped up the base that was already looking solid thanks to the previous week’s storm that delivered 85 cm of snow.

This morning we woke up to 4 cm fresh snow on the mountain with snow falling throughout the day and more in the forecast tomorrow!

With more terrain now open, its allowed us to release more lift passes through to the end of the season. Head over to our lift passes page to try snatch one of the remaining passes up!

The clouds are clearing and we have a beautiful sunny day ☀️ 😎
Fresh snow feels ❄️😍🙌
Weekend shred 🤙 Freshies and fat flakes ❄️🙌🤤
20cm up top overnight👆Plus more on the way ❄️🙏 Bring on the weekend ⛷🏂
❄️Happy Friday🙌 Fresh flakes have been falling all afternoon and it’s predicted to keep up all weekend🥳
🚨SNOW ALERT🚨 The storm has arrived🙏❄️
Yeah baby 👊 The fresh snow delivered today and experts are calling for 60-80cm to fall between Friday and Sunday ❄️🙌⛷ Hit the link in BIO for the full forecast 👆
Light, dry and loving it ❄️❤️ 15cm storm total so far...forecast for more fresh snow later this week looks 👌
10cm of fresh overnight ❄️👍 Going to be a good day ahead 😍⛷🏂 Stay tuned for what it looks like up top
Looking for a new winter adventure? We’re excited to kick off the Thredbo Backcountry Tours supported by @thenorthface_aunz from next Monday 10 August 🤙❄️🏔 If you’re up for an adventure...this is definitely for you! Hit the link in BIO to book your tour today...
The storm’s arrived ❄️🙌⛷A dusting overnight and more in the forecast 💪 Stay tuned for updates...
Side hits and slashes 🏂
View social feed